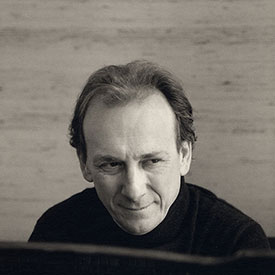 Jeremy Menuhin is widely regarded for his artistry and the integrity of his interpretations: ‘unfailingly lyrical, exemplary, exquisitely polished, yet directly expressive’ (The New York Times).

He has played in many prestigious venues, among others the Kennedy Centre in Washington, the Berlin Philharmonie, the Royal Festival Hall, the Albert Hall, the Wigmore Hall and Barbican in London, Lincoln Centre, both Alice Tully and Avery Fisher, and Carnegie Hall in New York, the Musikverein and Konzerthaus in Vienna, the Théâtre des Champs-Elysées, Salle Pleyel and Salle Gaveau in Paris, the Concertgebouw in Amsterdam, the Rudolfinum in Prague, the Liszt Conservatory Hall in Budapest, the Conservatory Hall in Moscow, and the Philharmonic in St. Petersburg.

Mr. Menuhin made his New York début as winner of the Young Concert Artists Competition in 1984, and since has collaborated with renowned artists such as Yehudi Menuhin, Joshua Bell, Mstislav Rostropovich, Steven Isserlis, Gérard Caussé, Bruno Giuranna, and many Quartets of international reputation.

Mr. Menuhin has recorded works by Schubert, Mozart, Debussy, Beethoven, Dvorak and Bartok for Chandos, EMI, and Nimbus, and a disc of previously unrecorded works of Shostakovich with Alexander Rozhdestvensky and Mookie Lee-Menuhin for Firsthand Records. His recording of Bartok’s Sonatas for violin and piano with his father, Yehudi Menuhin, was awarded the prestigious ‘Grand Prix du Disque’. HIs Schubert recordings for Dinemec Classics have been widely acclaimed. To quote the London Times: ‘Every harmonic side-step, every momentary change of pace is tasted to the full.’

In recent years Jeremy Menuhin has rediscovered composing, a legacy of his years with Nadia Boulanger. He has written a suite for two pianos in the Baroque manner, a string quartet, a piece for ‘cello and piano, a set of variations on a original theme for piano four-hands, a double piano concerto, a four-hand piano concerto in the baroque manner, and transformed 2 movements from Brahms’ sextets as well as the title movement from Schubert’s Death and the Maiden quartet. Jeremy Menuhin’s works have received enthusiastic reviews from various major critics:

‘Menuhin’s Suite in the Baroque Manner for two pianos (meticulously played by Menuhin and his wife Mookie LeeMenuhin) combines real knowledge with a lively melodic gift in a suite of which the great Bach himself might have been proud.’
– Sir Roger Scruton: ‘Counterpoint and Why it Matters’, (out of ‘The Future Symphony), who is the author of Music as Art.

‘The music contained in Jeremy Menuhin’s Variations on an Original Theme and the Fantasy is so varied – at times deeply moving, at others brilliant, full of fantasy, and engagingly entertaining, and yet possessed of a mysterious unity.’
– Bruno Monsaingeon, director of ‘Mstislav Rostropovich: the Indomitable Bow’, ‘Glenn Gould: Hereafter’, ‘Nadia Boulanger: Mademoiselle’, ‘Sviatoslav Richter: The Enigma’.

His transformation for 2 pianos of the Schubert quartet movement, along with other four hand pieces of Schubert, were recorded with his wife Mookie Lee- Menuhin, who together form the Menuhin Duo.

In late 2018 a CD entitled, ‘The Voice of Rebellion’ was released by Genuin Classics of Jeremy Menuhin’s two piano works, including the set of variations for four hands, played by the Menuhin Duo.

This website uses cookies to improve your experience while you navigate through the website. Out of these cookies, the cookies that are categorized as necessary are stored on your browser as they are essential for the working of basic functionalities of the website. We also use third-party cookies that help us analyze and understand how you use this website. These cookies will be stored in your browser only with your consent. You also have the option to opt-out of these cookies. But opting out of some of these cookies may have an effect on your browsing experience.
Necessary Always Enabled
This is an necessary category.
Analytics
Analytical cookies are used to understand how visitors interact with the website. These cookies help provide information on metrics the number of visitors, bounce rate, traffic source, etc.
Advertisement
Advertisement cookies are used to provide visitors with relevant ads and marketing campaigns. These cookies track visitors across websites and collect information to provide customized ads.
Save & Accept